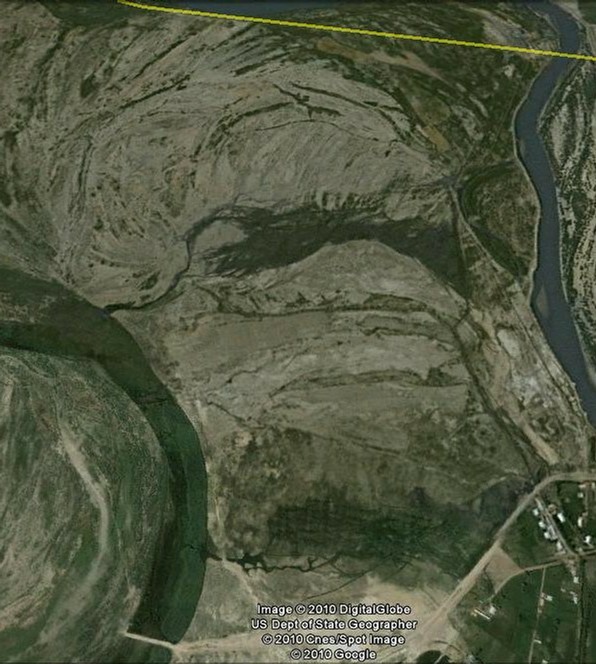 On the right is a natural mapping image of the first aborigine. Off image is his wife. There are others on various landscapes.

The image on the left has lines to define the appearance of the Australian aborigine. However, the one on the right does not. This is so realistic and obvious that no further comment need be made.

The “other sheep not of this fold” in John 10:16 excludes all others tribes on Earth except indigenous Australians. As the Good Shepherd He knows and looks after these sheep and has made them one through His death on the cross. This gentleman also has a FIMIOL at the foot of Mount Ciynay (Sinai) adjacent to the crucifixion and resurrection FIMIOLs.

The first Australians Miylan and Liyliy arrived on the Tiwi (Melville) Islands north of Darwin after a long journey from present day Armenia east of Turkey on Saturday, October 21, 3286 BCE. Only later did they sail over to the mainland in their boat. Prior to their arrival there was no indigenous presence on the Australian mainland. These are the spiritual energies active on that day.

The First Arrival on the Tiwi (Melville) Islands

Season:- Spring in the Southern Hemisphere.  Century Module:- '15/16' [across the sea to an island].

Captain James Cook first discovered New South Wales during ‘3/4’ in 1770. This is a men and women’s business Thrones module, often experiencing the proverbial trial, crucifixion and resurrection where, when one is about to give up, then renewals occur. Usually it is an all or nothing module. H.M.A.S. Sydney sank off the coast of WA in WWII during ‘3/4’ with the loss of all on board. It is also a patriarchal energy with men banding together for a cause and women joining guilds to assist those suffering. It tends to be a mocking energy and has an interest in digging and dealing with bad smells and odours. Australia has ‘3/4’ as an aspect of its founding module.

100 is a ‘many stops to a destination’ energy with a trail left behind. It adapts whatever it has been given, often by re-inventing it. 100 also enjoys telling stories. It was Yeshuwa’s first energy cluster too, as well as the apostle Paul’s. 101 is a short stay energy, explaining why tribes move around the land. It fosters competition and excellence in craftsmanship. Furthermore it is a pathway energy. The 000 of the third cluster from the right has to do with how resources are used. Here it is an ungrounded, yet spacious energy. The fourth cluster 100 deals with behaviour in the camps and explains their walkabout tendencies. The fifth 000 refers to the activities in the local environment or district and the sixth 010 to the wider region and the final 100 to the continent.

By understanding these energies one can appreciate what drives indigenous Australians. The prime factors further enhance this understanding. The 2^2 x 3 expresses in simple terms how they observe and deal with others and their environment.

#43 Concept - 191 [190 = 2 x 5 x 19 and 192 = 2^6 x 3] is a fortuitous, single-minded energy which knows what to do to bring about resolution and completion. Usually this involves a series of steps which must be followed literally. These can be based either upon previous experiences or acquired abilities, where all necessary resources are available and within easy reach.

Here risk is kept to a minimum. The answer, while one of several options, is found on its list. Where risk is taken, new possibilities are explored by following a series of steps. Although hope might seem lost and one is at their lowest ebb, this Moon number comes along and not only offers encouragement but brings about a swift resolution. In hindsight it is as if a wonderful thing has happened, resulting in renewed optimism towards the future. Even upon looking back, there are no regrets.

Individuals and communities alike may be confronted by what seems like a monstrous challenge. Usually this occurs while one is having a private moment surrounded by four walls or out in nature, perhaps in a small clearing. One's space may be invaded or advice of a challenging nature received, perhaps from a stranger, which at first seems to destabilise one's beliefs or comfort zone.

This threat cannot be ignored. There could be a disruptive weather event such as very high or low temperatures, a blizzard, flooding from heavy rain or damage from storm winds, fire or even earthquake. One may be informed of a life threatening illness or condition which might confine one to bed for some time. Others will just hear of these things and wonder how they will deal with them.

Whatever the circumstances, one is going to be pre-occupied for some time with overcoming the dilemma. So thinking caps are put on. Close family, friends or colleagues may be called upon to assist or provide reassurance and advice. The search for flaws, solutions or simply a way to escape begins.

Curiosity seeks certainty, safety and security. A path through the proverbial jungle of facts and obstacles is negotiated. This is achieved by employing the same reviewing techniques previously used to redefine and improve one's own knowledge and comparing the threatening data with what it has previously learnt.

If history is involved, then calendars may be consulted and dates and times discussed. Where adjustments to one's life are required, these are taken on board. Having discovered and dealt with the Achilles Heel of the challenge, fear subsides and one feels safe at last, confident of the future again. [R0309]

A detailed story behind their journey and arrival will be told in a future e-Book. Other FIMIOLs of the Australian Connection will also be published or republished in a later e-Book.

Back to the Australian Connection

The Australian Connection To The Garden of Eden -  II