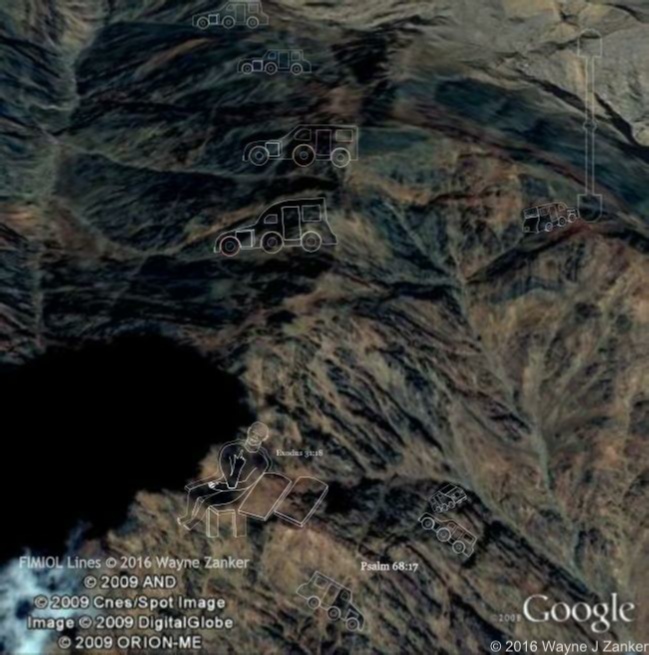 On this slope near Mount Ciynay (see-neye) may be seen eight IRV FIMIOLs along with a seated Yahuw’ah preparing to inscribe two tablets of stone with the commandments listed in Exodus 20.

Back to Help For Childless Woman

A Conundrum With An Unexpected Solution

With a million plus people in 1603 BCE fleeing from a Hyksos tyrant and heading for the barren Ciynay wilderness, how could so many be fed? There were no cafes, farm gates and supermarkets offering food for sale. Water was normally scarce too. So how were their bellies satisfied and thirsts quenched enabling them to survive?

The Exodus narrative recorded on Hebrew scrolls speaks of “manna” lying on the ground. Manna is food: “small, scale-like, small like frost,” “like coriander seed, white with a taste similar to cakes with honey” (Exodus 16:14,31). That description is interesting for its detail. It could be eaten raw, baked or boiled (16:23).

This “manna” was delivered six nights a week for some forty years by IRVs or heavenly vehicles and sprayed around their tents. Psalm 68:8 speaks of the heavens (clouds) dropping rain at the Presence of Eluhiym. So fresh water was plentiful for both people and livestock during all seasons, hot and cold. There was no spiritual rock called Christ following them (see 1 Corinthians 10:4).

Coming as it does from Heaven (John 6:31-32) indicates that food is grown and processed in the Heavenly Yeruwshalem for consumption there.

Logically life does not end when the physical body dies. Its soul goes on another journey. Ultimately there are just two destinations: Heavenly Glory or the Pits of Gloom and the now million-miles long Lake of Fire.

Since the historicity of the Exodus and existence of Yeshuwa can be proven beyond all reasonable doubt, Heaven alone is the source for this manna. Other attempts invented by desperate scholars to explain it end up destroying their own arguments.

In Eternal Glory no one sits on fluffy clouds holding harps for millions and millions of years singing “I’m a happy little Vegemite” (a tasty Australian delicacy like Marmite derived from yeast, spread on toast and enjoyed). They work, relax, build, create and learn to their hearts’ content. And they speak Hebrew too. Heaven also has twenty-four hour clocks and a 13-month, 20,000-year calendar.

Those who dwell on its slopes also get to experience rain, unlike the sad souls in the other places (Luke 16:24). Why would any one want to go and spend millions and millions of years in such a hot, dry, cramped and nightmarish environment, when the most amazing existence known as Eternal Life is on offer in another Place visible from there, yet way in the distance?

Work does not cease when one dies or leaves this life unless going to the other places. It continues in Glory for those who want to do it, yet without the tyranny, bullying, exploitation and over regulation of earthly employment. Workers there are also remunerated, so they can purchase items. Heaven has its own economic system. Housing is supplied at the cost of community involvement.

Around April 2015 I wrote an article on fimiol.com.au regarding a future form of transport. It would take until April a year later to be shown ten FIMIOLs of the chariots of Yahuw’ah on one of the slopes of Mt Ciynay referred to in Psalm 68:17. Together with these were found another twenty FIMIOLs, clearly identifying them as the “chariots” used during the Yisra’elite sojourn in the wilderness.

These IRVs or Instant Relocation Vehicles  are different from anything else experienced since by man. While they look like twenty-first century CE vehicles, they are from the second millennium BCE and earlier - much, much earlier.

Like the picnic table with its wine glasses and plates in the FIMIOL of the First Ever Wedding, they belong to a highly advanced, technological society - far from the hunter-gatherer, tree and cave dwelling human ancestors who imaginatively evolved from primates.

Such vehicles with on-board computers access a dimension governed by complex laws, where time and space simply do not exist. What is being discussed here, in fact, lies at the opposite end of the transport spectrum.

Time manifests in all directions, indicated whenever a light is switched on and its rays radiate for all to see wherever they are. Light speed is measured by how far photons travel each second.

For moving from one place to another the fabric of time and space between locations is treated as though it does not exist. This is a key attribute of the Seventh Dimension, which is adjacent to Heaven in the Eighth and makes instant access there possible.

Whenever I visit Heaven in the Eighth Dimension -  and I have done this over 800 times since 1992 -  and enter the Temple of Eluhiym, I always sense a membrane in front of me which stretches as I move forward. Not only does it protect me from the powerful energies inside, but is necessary to reach there. The Seventh Dimension makes access instantly possible, although a special prayer is spoken to get there. And Heaven is up to four times our non-expanding universe away from Earth!

For years I had wondered how I could observe the weekly rotation of the 24 Thrones of Revelation 4:4 and then match its timing with the language changes previously witnessed at the same scheduled time of around 10:22 p.m. each Tuesday evening.