A New Form Of Transport -  Pt I

This explained it and reveals the absolute technological superiority of the Creator Eluhiym over both God and any imagined deity, no matter how great or small. It has been twenty years now since such observations began.

However, these are not String Theory dimensions, since they are real and not created for mathematical convenience. A billion people could be using it all at once and the space-time fabric in the outer material dimensions would remain unaffected. It is very safe indeed.

To modern space science this is quite incomprehensible, since it is firmly fixed on Professor Miguel Alcubierre’s Warp Drive which takes advantage of a loophole in Albert Einstein's theory of relativity.1)

IRVs never compress or expand the space-time continuum. There is no need. It will be interesting to see such compression and expansion in action and how effectively it transports ships through outer space. 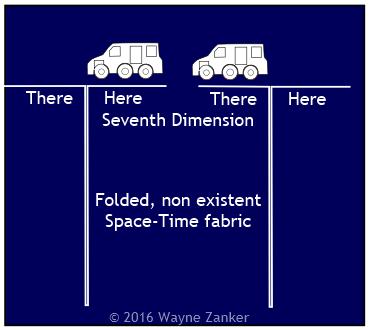 Yet to enter that dimension, a certain frequency has to be reached. Earth’s curvature or any objects on the trajectory are irrelevant.

As one can see, there is no compression and expansion of time and space to make this happen.

There is also no sense of movement, just the startling realisation that one has arrived.

Once the correct frequency has been reached, new drivers are needed for movement and elevation. Gears, clutches and the steering wheels of combustion engines are made redundant.

IRVs can then lift off the ground, hover, turn in a 360° circle, move to the left or right and disappear, instantly re-appearing in another location, regardless of how close or far away it is. Weightlessness within its special field enables already prepared, heavy objects to be raised and moved into position with confidence.

Galaxies were once moved this way to create the equatorial zodiac. That never happened by accident or by some big bang singularity. Such movements began about five billion years ago.

The wonder of this machine is that one can go from a stable state to another stable state simply by working the right frequency and then restoring the outer-dimensional frequency.

Having said this, whenever one leaves and re-enters gravity, one causes gravity waves. Even though an IRV does not move when two locations on the space-time fabric are joined together, releasing them causes a ripple effect. This is precisely what happens when stars and galaxies are moved around.

Gravity is like a spring. It bounces around when disturbed. Similar to a stone thrown into a lake or pool of water creates ripples, so gravity lets the material world know that it has been disturbed. Gravity is a dimensional phenomenon. IRV traffic, though, has a minimal effect.

Isaac Newton’s laws of physics have no impact upon them until they leave that frequency and settle back on the ground. Their six wheels give them stability on whatever terrain they land, especially on slopes. Electric motors attached to the middle set assist with parking. The two front sets are capable of being turned by a steering wheel with the rear wheels also turning, if need be.

As in the near future, so way back then their power sources were electrical batteries. The motor stored in the cube housed within the engine compartment ran on electricity. Lamps at the front and within provided light for night time landings and take-offs.

However, aerodynamics is not important for their design, although one would expect a sense of balance to be factored in. The back will more than likely be heavier than the front. Yet why are no wings displayed in any of the FIMIOLs? Hot air balloons have no wings too.

During the Exodus IRVs travelled to and fro, except on the Sabbath when they parked at Mt Ciynay or wherever the Eluhiymic Presence dwelt. Shabbat or the Sabbath was from Sunday p.m. till Monday p.m. Otherwise each day they travelled up to four times the diameter of this non-expanding universe and back with the greatest of ease, bringing manna from Heaven to spray around the camps of the refugees from Mitsrayim or Egypt (Psalm 68:17).

Of course, smaller and larger IRVs were built. Planet Earth was delivered to its current orbit from Heaven aboard a large transporter at the start of September in 6342 BCE. The blue planet had been compressed to about 107 imperial feet in diameter using 390625 compression technology. Earth is now on its ninth mission.

Moving mountains and uprooting trees by faith, then dumping them elsewhere, and even walking above waves (not on water) is possible once the laws of the Seventh Dimension are known.

OM the Dragon landed an IRV at Mt Ciynay on Tuesday, February 25, 27 CE, to take a physical Yeshuwa to Heaven and tempt Him to jump off the Temple there. So Heaven is no ethereal place and IRVs can land here on Earth.

1. Watch Muon Ray’s Youtube video and others by NASA scientists.